Just before noon on Nov. 23, police responded to a home on East Folley Place near Gilbert and Frye roads for the report of a possible break-in. A resident who wasn’t home at the time called 911 after his surveillance cameras alerted him to motion, showing an unknown car backed into his driveway and a man inside the house. He said the suspect was wearing a black hooded sweatshirt, a white mask and was carrying a hammer.

Officers who arrived heard noises coming from inside the closed garage. Moments later, the door went up and body cam video shows Smestad hiding behind a car. As officers order him to come out, he runs back inside the house.

Moments later, a body cam worn by a detective positioned near the back of the home shows Smestad standing on the back porch armed with a rifle. From behind a brick wall, the detective orders Smestad to drop the gun but he refuses. The detective then fired at the man after police say he feared for the life of another officer who was now in the backyard.

Video shows both officers continue ordering Smestad to drop the rifle, and the second officer eventually opened fire when he thought the suspect was turning towards him. Smestad died later at an area hospital. No officers were hurt. 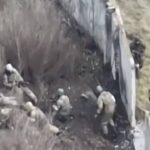 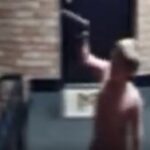