According to reports, a Fresno, CA police officer is facing multiple charges, including robbery, illegal possession of meth, and a DUI after reportedly stealing drugs from a suspect, using them, and crashing his patrol car.

The officer, Donnie Dinnell, admitted to taking the drugs from a woman he’d stopped earlier that day. The 19-year veteran of the police force told the woman to give him the narcotics and he’d let her go without penalty. In the police report, Dinnell wrote “unfounded” for the narcotics and took the drugs with him instead.

“A 911 came into our dispatch center and said that a police car was driving erratically in the parking lot,” said Fresno Police Chief Paco Balderrama. “The police car was described as running over curbs and striking a tree, disabling the police car.”

Dinnell’s fellow officers initially suspected he suffered a heart attack but realized what actually happened after learning of his earlier interaction with a suspect who had drugs.

“I anticipate that Sgt. Dinnell will be hopefully turning himself in and he will be booked into the Fresno County Jail,” Fresno County District Attorney Lisa Sondergaard Smittcamp said. “He’ll be treated like any other criminal suspect.”

Dinnell is set to be in court on May 5. 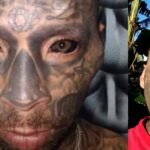